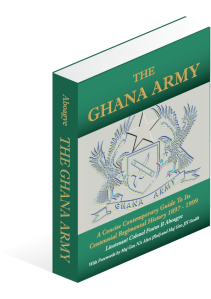 The Ghana Army is deemed to have its origins in the Gold Coast Constabulary (GCC). The Constabulary was raised in 1874 with a nucleus of the Lagos (Glover’s) Hausas after the Sagrenti War (1873-74). In 1901, the GCC was designated the Gold Coast Regiment (GCR) and amalgamated with other West Coast Units into the West African Frontier Force (WAFF). The WAFF itself had been brought into being in 1897 on the orders of Lord Joseph Chamberlain, the then British Secretary of State, that regular military units must be “raised” in all the colonies. In the Gold Coast at least, the existence of the GCC meant that such a unit could be “formed.” The Yaa Asantewaa-led Uprising in Ashanti created the right framework for the concentration of these pre-WAFF forces in 1900 under Col James Willcocks. Thus, immediately after the Yaa Asantewaa War, WAFF was formally constituted by amalgamating the GCR and other colonial forces from Nigeria, Sierra Leone and the Gambia.

The order to “raise” regular colonial units in 1897 was, however, not the first in the military history of the Gold Coast. As far back as 1821, the then Governor, Charles McCarthy, had raised the Royal African Colonial Corps of Light Infantry (RACCLI). It was nearly annihilated in the Battle of Nsamankaw in 1824 along with other evolutionary militias and native levies all of which could have served as the beginning of a Gold Coast Army, had they survived the battle with Ashanti. Another attempt was the raising of the Gold Coast Corps in 1852 but this attempt was also aborted by the disbandment of that Corps in 1863 for mutinous character. The Gold Coast Rifles, raised in 1873 and officered by natives for the Sagrenti Campaign, was also disbanded in 1874 for no apparent reason except to guesstimate that the British preferred the “fighting qualities of the Hausa race” and therefore formed the GCC from a nucleus of Glover’s (Lagos) Hausas, thereby strategically imposing a “foreign” repressive force on the Gold Coast.

Thus, since the modern Ghana Army is modelled after European military traditions, its origins must, in principle, be traced to all the evolutionary European-type regular unit(s) in the Gold Coast. The fact that the origins of the Army are taken from 1897-1901 is, therefore, an aberration of the military history of the entire nation, especially, since it ignores the evolution of indigenous military institutions in the Gold Coast and the politico-military factors that compelled the formation of such forces.

Since military institutions are political, social and economic responses of societies to their security needs, as well as their socio-economic hopes and aspirations, it should have been expected, once again, that the European (British) attempts at introducing their military models should be related to indigenous politico-military traditions that made such attempts necessary in the first place. If, therefore, the history of the Ghana Army is to be understood in its right perspective, it is the African perspective, and not the European, that must be underscored. The real origins of the Ghana Army therefore predate both the Gold Coast Constabulary (GCC) and the Gold Coast Regiment (GCR). It must be traced to the first militias established by the Portuguese, inherited by the Dutch in 1637 and by the British in 1872. It must also include the militias inherited from the Danes in 1850 and all the other colonial regular forces raised for the purpose of colonial domination. Such a history must also be intrinsically linked with the politico-military actions of all the tribes which influenced the raising of such European-type forces.

Incidentally, the aberration from the British perspective is so entrenched that the traditions of the modern Ghana Army are shorn of much of its indigenous and other imperial European content. Simply stated, it is incorrect that the regimental history of the Ghana Army is that which was largely inherited from the last colonial master, the British. Redressing this entrenched misconception implies digging deep into details which may be considered too ambitious for a writer of a Concise Contemporary Guide of this nature that is limited to One Hundred Years of the Army’s regimental history. The purpose of this publication is to provide in outline, the essential aspects of the regimental history of the Ghana Army as a prelude to a more detailed work and to facilitate an appreciation of the character and worth of the Ghana Army.

On the basis of this historical aberration, the Concise Contemporary Guide also aims to emphasise the fact that, from 1997, one hundred years after Lord Chamberlain’s order for the raising of regular military units in all the colonies, the Ghana Army is in a centennial period till 2001, one hundred years after such forces, including the GCR, were amalgamated into the WAFF in 1901. Even though RWAFF ended in June 1960, the GCR which had undergone considerable changes was survived by the Gold Coast Military Forces on 1 July 1956 until March 1959 when this force severed itself from the RWAFF West Africa Command (WAC).

Leaving aside the question of what really constitutes the actual origins of the Ghana Army, the regimental history of the Army, firstly, essentially involved a political transition from colonial and imperial control of the Army for colonial repression and domination, to control by an independent and republican government with its own aspirations and expectations for a Ghanaian and African identity. Secondly, it was a qualitative professional transition from Lee Enfield Rifles to semi-automatic firepower for the projection of a professional image and a credible military deterrence. Thirdly, it involved a quantitative professional transition from a limited force with constantly changing levels within the framework of imperial regional power interests to that of a relatively fixed force level of combined arms and services to meet the requisite political imperatives of the “first independent Black African country south of the Sahara.” Fourthly, it was a transition that involved the struggle for the attainment of equilibrium in national political power, a struggle that has seen the Armed Forces on the centre-stage of national politics for a greater part of the history of the country as an independent state. Among other things, these four factors are largely the denominators and determinants of the regimental history of the Ghana Army.

The Guide therefore starts by tracing the “Making of the Gold Coast Nation” in order to establish the socio-political framework which imposed vital military roles, the non-accomplishment of which, it would have been nearly impossible to give birth to the Gold Coast nation. It is not sufficient to view the Concise Contemporary Guide against past and contemporary British Army traditions. In addition to that view, the evolution of the officer corps which had such profound influence on the crucial political imperatives and denominators, would need to be appreciated and put in the proper context of the Army’s regimental history. Having set the stage, so to speak, an overview of the evolution of the Officer Corps, inextricably linked with the Africanisation and Ghanaianisation process, is explored before delving into the key regimental traditions and historical aspects of the Army and its separate Units.

As already indicated, a more detailed contemporary indigenous military history of Ghana, including the art and concept of indigenous warfare and the European military traditional origins of the Ghana Army, will be published as sequels to this history. This notwithstanding, I very much hope that the Concise Contemporary Guide to the Centennial Regimental History of the Ghana Army will provide the essential facts of the history of the Army in a form that would facilitate further works and studies before much of this unwritten history would have been buried in the annals of our evolution.

Even though the Concise Contemporary Guide is a Centennial Regimental History of the Ghana Army, it is not a chronological chronicle as such. I have rather chosen to present details in outline monographs because I consider that it is in such a format that the history makes easy and more meaningful reading and comprehension.

Finally, a word of caution. A number of commonplace military abbreviations have been written into the book. This is deliberate so that readers would be adequately introduced to their use which is an intrinsic part of military culture world-wide. Practically speaking, it is hoped that readers and those who study or interact with the Ghana Army and Armed Forces would be able to use such abbreviations correctly in their work reports in order to avoid or minimise the embarrassment that is sometimes occasioned by the use of inappropriate or incorrect military abbreviations. A very short glossary of abbreviations has been provided to make reading easier and to facilitate such an understanding.

It is planned to revise and publish the second edition of the book in early 2018.